To fully customize how your entities look like on the battle map, you first have to understand the concept of stances, or poses in LeTBS.
In battle, your entities are supposed to take different poses depending on their actions or what's happening. One such example would be a dead pose, which represents how the entity looks like when he is defeated, or an atk pose, which would be how the entity's sprite is supposed to be displayed when it attacks.

By default, each entity has a default pose, idle and, if the entity is an actor, his character sprite would be used as such.
Also, you can have any pose you want, but LeTBS use these ones internally:

For example, the dead pose is called whenever an entity is knocked-out.

The following notetags let you define new poses or overwrite existing ones. They are supposed to be wrapped inside the letbs_sprite tag.

One way of representing how a pose looks like is using MV characters.
They may look like this:

Both formats are supported and the notetag letbs_sprite.chara lets you use them:

In practice, here's how you use it.
If you're familiar with MV then you know that the first picture displayed in this section is in a fact a sprite called Actor1 inside your img/characters folder.
This is a character-set. Each specific individual in the set is located given an index, as such: 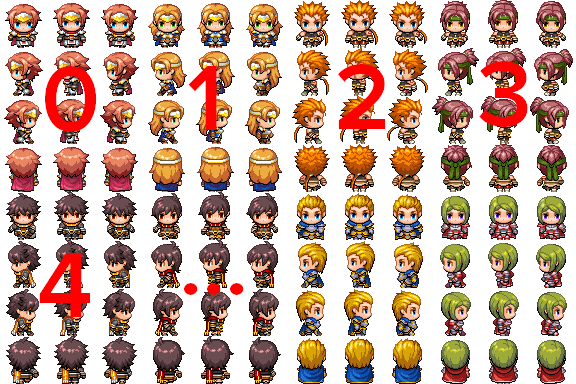 We just covered what character_name and character_index are. So, if we want to use the green haired guy as the idle pose, this is how the chara tag will be used:

When rendered, your entity will have this texture:

To explain the next parameter, line_index, let's examine another use case.
You're probably familiar with this another character-set: 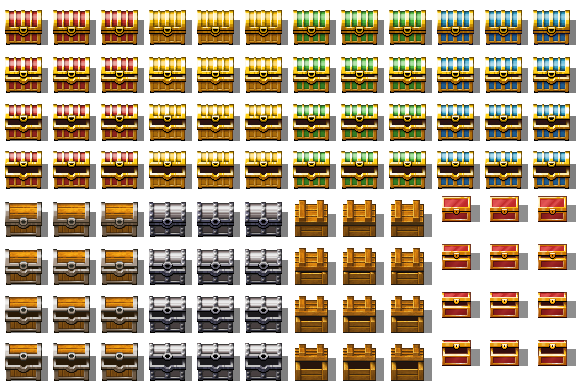 Its name is !Chest.
Let's say we want to use the golden red chest as our entity's sprite. But we do not want the whole sprite. We're only after this highlighted part:

We want our entity to looks like that all the time. That's when the line_index parameter comes handy. Just like how individuals are indexed in a character-set, each line of one character is indexed too:

It comes to light that we're after the line indexed as 2.
This is how the chara tag can be used to fulfill this use case:

This is the resulting rendered texture:

As we wanted, the entity will look exactly the same no matter the direction it is facing. 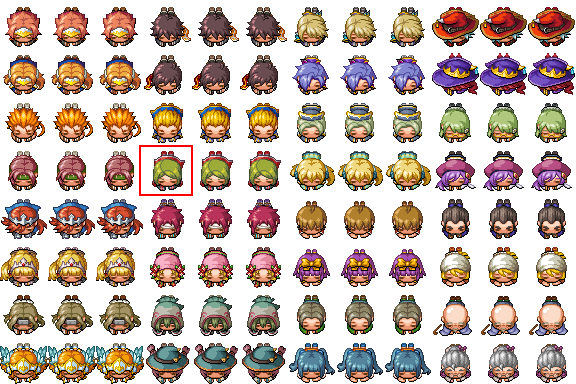 And we finally have our fully rendered sprite's texture:

You'll notice that the rendered texture is a single frame, without any sense of direction at all. LeTBS supports such format (see static images bellow).

The reason LeTBS still rendered the chest as a full directional sprite is a technical one. Pay no mind for now.

In addition to characters and sprite-sets, you can use static images as a pose. A static image is an isolated, single framed image with no sense of direction. Static images are used with the letbs_sprite.static notetag:

Static images for LeTBS should be located inside your img/leTBS/battlers folder.

Let's see a quick example. We have this picture named Snake and we want to use it as an idle pose:

The tag to use would be:

In addition to characters and static images, you can also use animations as poses. You can define a single animation for a given pose, or provide an animation for each direction, for that same pose.

This is an example of its usage:

This setup defines two poses: idle and walk. For idle, an animation is used for each of the entities direction, and for walk, only one is used for any direction.

With this tag, entities get an empty bitmap. Under the hood, this tag relies on loop animations.

Sprite configurations can be mixed however you want and the letbs_sprite can be used on any game objects. As soon as the configuration change, the sprite is re-created.
This is an example of a mixed configuration:

In addition to this notetag used inside the actor's armor notebox:

This set of configuration creates 3 poses:

Note that by default an idle pose would be created too.

If suddenly our entity gets affected with a state with such configuration:

The previous idle pose would be replaced and the entity's sprite recreated. Note taht this happens because states notetags have an high priority over other game objects.

This functionality lets you draw sprites on top of your entities. For example, this is useful for displaying equipment in battle. This is done by using the letbs_sprite.overlay tag:

The overlay tag relies on chara and static seen previously. These tags load bitmaps the same way as explained, but with the difference of displaying them on top of the entitie's sprite.

Notice how overlay is a nested tag, inside letbs_sprite. If you're not familiar with how notetags work in LeTBS, see this page. (WIP)

Let's say we have two accessories in the game's database. One hat and another one that grows a tail on your character! We'd want to display these accessories in battle. Here's how to do that.

First we make sure that we have the assets we want to display. In this case we are using those:

As you can see, they are actually similar to the characters formats. As overlay relies on the same loading methods seen previously, the same format applies here. It's just like we're loading an entitiy's sprite, but it is rendered over what's already here.

To get the desired result, we need to put this tag inside the hat accessory's notebox:

In battle, the entity's sprite will be rendered as such:

This tag can be mixed and used by all game objects.

Sprite effects are more ways for you to customize how entities look like in game, and dynamically. One set of these effects rely on the letbs_sprite notetag and can be used as such:

Note that these effects are applied dynamically depending on the entity's notetags inventory. Adding a state that contain these tags will update the sprites in real time.

target is either screen or sprite and color should be in the hexadecimal form (like #ffffff).
One use case of timed effects is playing a random step sound when the walk pose is played:

Or, shaking the screen while a VERY large monster is walking:

I invite you to browse these tags into the Master List of Notetags.